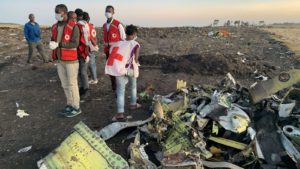 Ethiopian authorities will send DNA samples from last month’s crash site of Ethiopian Airlines flight ET 302 to London for identification tests. All 157 passengers, including crew members had died in the March 10 crash of Boeing 737 Max 8, leading to the grounding of all 737 Max planes worldwide.

A report by the Bloomberg news quoted an Ethiopian transport ministry official as saying that samples of the remains of the victims, which are currently in a hospital in Addis Ababa, would be sent to London for identification tests.

Spokesperson for the ministry, Musie Yehyies, told Bloomberg that the Interpol and U.K.’s Blake Emergency Services have been gathering human tissues from the remains.

The Nairobi bound flight that took off from the Bole International Airport crashed six minutes into its flight near Bishoftu, a town south east of the capital Addis Ababa. In October, a similar plane operated by Indonesia’s Lion Air crashed into the Java Sea killing all 189 passengers. A malfunctioning automated flight system was to be blamed in both crashes.

Families of victims of both crashes are suing Boeing. Dennis Muilenburg, the CEO of Boeing apologized last week and said software updates on max 8 jets would prevent future crashes.

Initial reports by investigators show the pilots of flight ET 302 have followed Boeing’s emergency procedures. The initial findings also show that the automated software kept pushing the nose of the plane down despite pilots attempt to manually control the plane before it hits the ground.