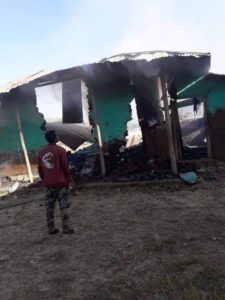 Fire gutted churches and mosques in Halaba southern Ethiopia and Gondar in the north in what locals say was a deliberate attack to incite religious unrest.

A resident of Alaba Kulito, a town sitting 38 miles west of Shashemene, told ESAT that 12 evangelical churches were set ablaze by a group of youth claiming to be Muslims. The resident said the Meserete Kiristos and Kale Hiwot churches were among the churches targeted by the arsonists.

Furnitures of the churches were set ablaze and arsonists also used molotov cocktails in the attack. Vehicles have also been destroyed. No casualties were reported so far.

A report by the Ethiopian Television said yesterday that the attack was prompted by fake news reports in the Ethiopian social media that said there had been an attack on mosques in the area.

A mosque was set on fire in Este, south Gondar last week, triggering condemnation by the community, which pulled together resources to rebuild.