Ethiopia: Protest continues in Dire Dawa as army warns of consequences of violence 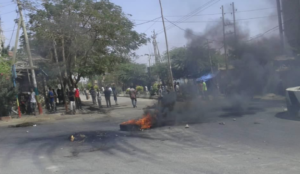 Street protest by residents of Dire Dawa entered its fourth day with protesters calling for the mayor to step down.

Residents blocked roads with burning tyres and rocks in several subdivisions of the city.

Some residents who spoke to ESAT said they could hear sporadic gunfire in the city.

The eastern command of the Ethiopian army meanwhile called on residents to clear roads and present their demands to the city government peacefully.

In a statement issued today, the eastern command said residents should refrain from violence and resolve issues in discussions with the city administration. The statement warns that the army would take measures to restore order and rule of law if residents continue with violent protests.

The protest in Ethiopia’s eastern city was triggered on Monday when a group of stone throwing youth attacked followers of the Ethiopian Orthodox church who were returning from the annual epiphany celebrations.

The protest evolved into broader demands by residents for equal rights for jobs and other opportunities in the city, which uses a quota system based on ethnic representation. The system called 40-40-20 is used in city government hiring in which 40 per cent of the jobs would be given to the Oromos, another 40 for the Somalis and 20 for the rest of ethnic groups.

The quota system, introduced years ago by the TPLF, the ethnic party that had been directly or indirectly running all regions and towns in Ethiopia, had faced backlash from the non Oromos and non Amharas, who said they were being treated as second-class citizens.

In an interview with ESAT, mayor of Dire Dawa, Ibrahim Ousman, defended the quota system saying it is should actually be a model for other cities. He called on protesters to be peaceful.

On Thursday, the mayor cancelled a planned meeting with residents, triggering more protests in the city.