Ethiopia: OLF denounces ‘airstrikes’ as govt denies any such attack 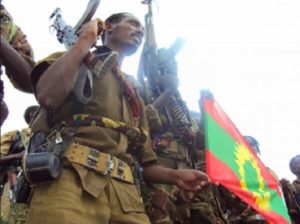 The Oromo Liberation Front (OLF) says government forces had carried out airstrikes in the western Oromo region as the government insisted no such attack took place.

In a statement issued today in response to a briefing yesterday by the office of government spokesperson that denies any airstrikes took place in western Ethiopia, the OLF said not only the strikes took place for two days in Qellem Wellega but also claimed the lives of seven civilians.

The statement by the OLF also said eight houses were also burnt down in the airstrikes which it said had taken place for two days on january 12 and 13.

The government on its part has been accusing the OLF army of perpetrating a number of deadly attack and destruction of properties in the region since its return from Eritrea in September.

A peace accord between the government and OLF in Asmara this fall had led to the return to Ethiopia of leaders and combatants of the Front that was once deemed a terrorist organization by the Ethiopian Parliament.

Meanwhile a statement from the Office of the Prime Minister issued today said the government, after giving peaceful and legal options a chance to stop violence, is now taking military action against groups that are bent on destabilizing the country.

On Wednesday, the communication Bureau of the Oromo regional government said 835 combatants of the Oromo Liberation Front (OLF) have been captured in the troubled region of Benishangul-Gumuz and the adjacent western Oromo region.

The Bureau said based on information obtained from a Command Post setup to quell violence that beset the two regions, several weapons and vehicles as well as other items of interest have been seized.