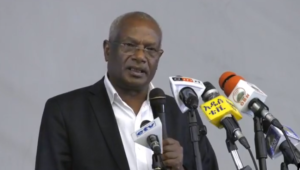 The Oromo Liberation Front (OLF) has agreed to disarm and demobilize its soldiers after mediation by Abba Gedas, who brought together leaders of the OLF and the Oromo Democratic Party (ODP), the party of the Prime Minister, for a day long reconciliation conference in Addis Ababa.

Ibssa recalled the peace agreement reached with the government in Asmara last summer and said the deal was for the OLF army to be part of the regional police force. But instead, he said, the army was checked into a camp and leaders of the Front were not able to visit them.

But the ODP last month said there were OLF soldiers still roaming in the western part of the country and accused that they had killed dozens, looted and destroyed properties, and triggered massive displacement.

The ODP and OLF leaders at the conference were pressured to accept a peaceful settlement by the Abba Gedas and representatives of the Oromo community. They have also formed a 71 member technical committee to handle the process of laying down of arms and demobilization as well reintegration of the combatants back to civilian lives.

In September, leaders of the OLF and its combatants returned to Ethiopia from their base in neighboring Eritrea following a call for peaceful political struggle by the government of Abiy Ahmed. But since their return, the Front and its combatants have been blamed for the deadly violence in the western Oromo region.