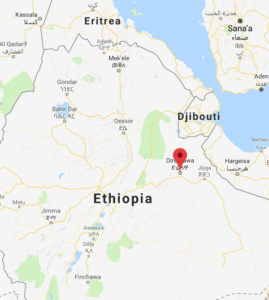 Organizers said there will be a strike by workers in Dire Dawa starting Wednesday to demand the release of hundreds of residents detained in the week long protest.

On Friday, the national defense forces were deployed to the city to bring calm and order.

One person was killed in a mob attack today and clashes have been reported in some neighborhoods, according to ESAT sources.

The protest in Ethiopia’s eastern city was triggered on last week when a group of stone throwing youth attacked followers of the Ethiopian Orthodox church who were returning from the annual epiphany celebrations.

The protest morphed into broader demands by residents for equal rights for jobs and other opportunities in the city, which uses a quota system based on ethnic representation. The system called 40-40-20 is used in city government hiring in which 40 per cent of the jobs would be given to the Oromos, another 40 for the Somalis and 20 for the rest of ethnic groups.

Protesters also demanded for the mayor to step down.

The quota system faced backlash from the non-Oromos and non-Amharas, who said they were being treated as second-class citizens.

Over 500 protesters have been arrested since the protest began a week ago, according to sources.