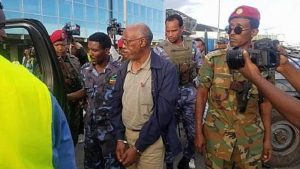 Police investigating alleged high profile corruption by the former CEO of the Metals and Engineering Corporation (MeTEC) presented additional charges in which Maj. Gen. Kinfe Dagnew had approved purchases and contracts worth millions of dollars without tender and procurement procedures.

Among a list of charges police had presented at the court yesterday include approval for the award of $347,948,000 to an American waste recycling company and later approving the payment of 5.6 million dollars to the Commercial Bank of Ethiopia for servicing the loan. The charge says the payment made to the Bank was a waste of funds as the project never materialized.

MeTEC, a military industrial complex that was run by TPLF army generals until recently is at the center of a corruption scandal for illegal purchases and contract awards worth $15B. Maj Gen. Dagnew was its CEO for 8 years. He was arrested last month in Ethiopia’s border town of Humera as he tried to flee the country to the Sudan.

The government’s crackdown against corruption has targeted high level officials and army generals whom the government says were responsible for the embezzlement of millions of dollars, nepotism, favoritism and mismanagement of the country’s military industrial complex .

The new charges also show the purchase of construction machineries worth $10.6M from a Chinese company without the proper bidding.

Under the orders of Maj. Gen Kinfe Dagnew, police also allege that MeTEC had bought several buildings in Addis Ababa worth millions of dollars from individuals without legal bids.