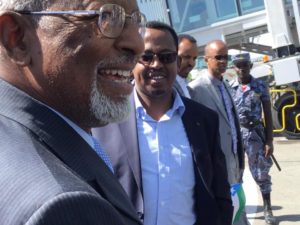 Leaders of the separatist Ogaden National Liberation Front (ONLF) have returned home following a peace agreement with the Ethiopian government to engage in peaceful political struggle.

A week ago, the group announced that it has officially laid down arms and combatants of the Front have returned to Ethiopia from their base in Eritrea. The move followed a peace agreement reached with the Ethiopian government in Asmara in October.

The chairman of ONLF, Admiral Mohammed Omer Ousman led the ONLF team that was welcomed in Addis Ababa by the vice administrator of the Somali region of Ethiopia, Mustafa Mohammed.

Since its establishment in 1984, the ONLF has been fighting for the self-determination and autonomy of Smalis in the Ogaden region of Ethiopia.

The ONLF had claimed responsibility for several attacks against government targets.