UN lifts sanctions on Eritrea, which called it ‘belated’ 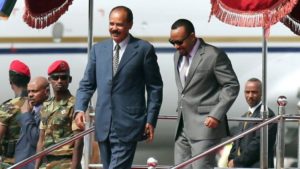 The United Nations Security Council has today lifted a nine year old sanction on Eritrea in a unanimous vote.

The arms embargo and other targeted sanction on Eritrea was imposed in 2009, accusing the East African country of aiding a Somali jihadist group, al-Shabaab. The sanction involves an arms embargo, travel bans on its leaders, and freezing assets of some of its officials.

The Eritrean government welcomed the decision but called it “belated;” and the imposition “unwarranted.”

“The Government of Eritrea welcomes this belated decision to redress injustice, almost a decade after nefarious acts were taken inculcating indefensible harm on the country,” the statement from the Ministry of Information of Eritrea said today.

The sanctions on Eritrea continued despite, in more than one occasion, a United Nations Monitoring Group stated in reports that “it had found no evidence of direct Eritrean support for al Shabaab.”

Eritrea accuses the United States of being the main force pushing for continuation of the embargo despite the findings of the Monitoring Group.

“The sad fact is three previous US Administrations (the Clinton, Bush and Obama Presidencies) pursued a misguided policy of propping up regional proxies or anchors, the TPLF regime in the case of Ethiopia, within the framework of a uni-polar global order,” added the statement from Eritrea.

The U.S. has lately backed down from its position and its national security advisor, John Bolton, supported a proposal by the United Kingdom for the lifting of the sanctions.

The lifting of sanctions followed recent positive developments in the Horn of Africa. Eritrea has thawed relations with its neighbors, especially with Ethiopia, that ended two decades of animosity.

The office of the Prime Minister of Ethiopia, Abiy Ahmed, issued a statement shortly after the decision by the UNSC.

“Ethiopia congratulates the people and Government of the State of Eritrea on the lifting of sanctions,” the office said adding that “the lifting of the sanctions is a significant step towards deepening the economic, social, and cultural ties the sisterly nations of Ethiopia and Eritrea enjoy.”

Detente among the regional neighboring countries has been viewed positively by Europe and the U.S., leading to the lifting of sanctions.

At the UN General Assembly in September, Ethiopia, Somalia and Djibouti called for an end to sanctions on Eritrea.

The UNSC resolution, however, extended the arms embargo on Somalia and Somali charcoal trade.