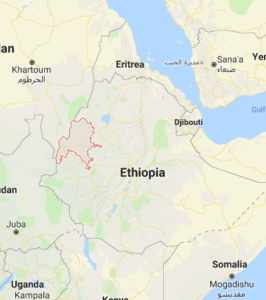 Police commander Geremew Assefa told ESAT that the police officers have come under attack while they were on routine duty.

Eighty houses were also set on fire, according to the commander.

Several people have left their villages for Nekemte following the attack.

Deadly ethnic violence in areas bordering the Oromo and Benishangul-Gumuz region in Western Ethiopia have so far left at least 40 dead and displaced over 70,000 people.

Meanwhile, spokesperson for the separatist Oromo Liberation Front (OLF), Tolera Adeba, told Deutsche Welle that it was the position of the Front that Oromos remain armed.

The regional and federal governments have however been calling on the OLF to lay down arms in line with the agreement reached with the government when its forces returned from neighboring Eritrea.

A number of opposition armed groups have returned to Ethiopia from Eritrea following a call for peaceful political struggle by Prime Minister Abiy Ahmed’s government. Combatants of theses groups have checked into camps to begin the process of decommissioning and rehabilitation to civilian lives.