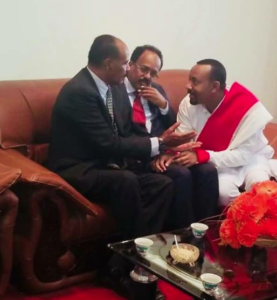 Eritrean President Isaias Afwerki is in Ethiopia for the third time in four months since the thawing of relations in July.

Afwerki is visiting Ethiopia’s northern region of Amhara, joined by President of Somalia, Mohamed Abdullahi Mohamed. The two leaders were welcomed in the historic city of Gondar by Ethiopian Prime Minister Abiy Ahmed and a jubilant crowd of students of the University of Gondar.

Details of the meeting by the Horn of Africa leaders in northern Ethiopia is scanty but the trio are expected to continue their talks on issues of economic integration, according to regional political observers.

The leaders visited the Bure Industrial Park, the University of Gondar and an irrigation project before heading to the resort city of Bahir Dar.

It is the third visit by Afwerki since the detente between the two countries began in April when a newly elected Prime Minister in Ethiopia, Abiy Ahmed, announced his country would accept a boundary commission decision that came at the end of a two year trench war in 2000.

The meeting between the two leaders in July in Asmara and the signing of a declaration ended two decades of animosity and paved the way for the resumption of flights, telecommunications and business.