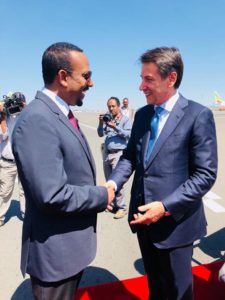 Italy’s Prime Minister Giuseppe Conte, who paid a two day visit to Ethiopia has said his country would support economic and political reforms in Ethiopia.

Mr. Conte has also applauded the peace agreement between Ethiopia and Eritrea that has ended two decades of enmity. He said he would encourage Italian investors to do business in the region taking advantage of the peaceful situation.

During the Prime Minister’s visit, Italy has provided a $25M grant and loan to Ethiopia.

Mr. Conte has met his Ethiopian counterpart, Abiy Ahmed, and held discussions on issues of investment, trade and peace in the Horn of Africa.

Italy and Ethiopia has over 100 years of diplomatic relations.

Concluding his visit to Ethiopia, Giuseppe Conte has travelled to Eritrea for a one day visit and met with Eritrean President Isaias Afwerki.

Prime Minister Conte applauded the “new positive dynamics which will bring a new age of peace & prosperity for the Horn and beyond,” Yemane G. Meskel, Eritrean Minister of Information quoted him as saying.