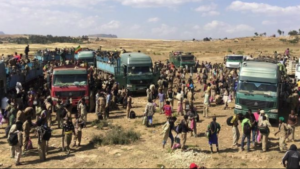 Three soldiers for the Tigray People’s Democratic Movement (TPDM) have died when a truck carrying them got into an accident in Segeneyt, on the Eritrean side of the border.

Over 2000 soldiers for the TPDM, an armed opposition group based in Eritrea, were returning to Ethiopia as part of a peace deal with the government.

One of the trucks carrying the soldiers involved in an accident killing three soldiers while over twenty sustained injuries, according to a report by the BBC Amharic service in Ethiopia. But the report did not say if the truck was overturned, crashed with another vehicle; or if the accident was a result of other causes.

The injured have been taken to Dekemehari Hospital in Eritrea.

A report by FBC indicate that about 2,309 soldiers of TPDM have arrived in Zalambessa, on the Ethiopian side of the border.