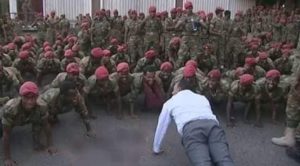 A group of soldiers showed up unannounced at the National Palace and demand to speak with the Prime Minister, who punished them with some pushups. The soldiers reportedly wanted the PM to address salary and benefit issues.

Wild speculations filled the Ethiopian social media today as a group of about 240 members of the defense force suddenly came to the National Palace and demand to speak with the Prime Minister, who ordered them to do some pushups, apparently for showing up at his office without notice.

The commotion at the National Palace has led many to speculate that some form of mutiny or coup was in the making. The Federal Police Commissioner, Zeinu Jamal, told the VOA that the soldiers first demanded that they enter the premises of the Palace armed with their weapons. There was boost up of security at and near the Palace out of an abundance of caution, according to the Commissioner, who said the soldiers were let in after they had been disarmed.

The soldiers have reportedly discussed salary and benefits issues with the Prime Minister, Abiy Ahmed and the Deputy Prime Minister, Demeke Mekonnen, according to the Federal Police Commissioner, Zeinu Jemal, who spoke to the VOA.

According to a post on the Facebook page of the Deputy Prime Minister, the soldiers have discussed on wide range of issues with Mekonnen, who promised that the nationwide reforms would also be implemented within the national defense force.

Later, the soldiers also met and discussed with the Prime Minister. But Abiy Ahmed has something in store for them. He ordered the soldiers to do some pushups as a form of punishment for showing up at his office without prior appointment.

But he also got down to the ground and did the pushups with the soldiers.