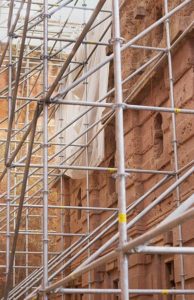 Scaffolding erected ten years ago at the site of UNESCO heritage rock-hewn churches of Lalibela is causing structural damages to the historic site, priests and residents of the tourist town said.

The priests and residents of Lalibela who took to the streets on Sunday to vent their concern said the scaffolding that was put together for the purpose of protecting the historic site from natural disasters was actually causing more damages to the rock-hewn churches.

The residents say they have communicated their concerns to authorities but nothing has been done to reverse the damages being done on the churches.

Experts have warned repeatedly that the scaffoldings would do more harm than good to the site.

The rock-hewn churches of Lalibela have been a main attraction to tourists travelling to Ethiopia but residents of the town and priests at the church say authorities have not given due attention to the structure that is cracking from the weight of the scaffolding.

The eleven monolithic churches were carved in the 13th century and are listed as one of UNESCO World heritage sites.