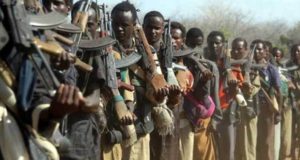 Resident who spoke to ESAT said the OLF soldiers had confiscated their weapons that they said have owned legally. The residents said the administration in West Wollega has been taken over by the OLF soldiers and the Qeerroo, a vigilante youth network in the Oromo region.

Some residents flee their villages fearing attack by the OLF, according to information obtained by ESAT.

ESAT attempted to reach OLF representative in North America for comment, but to no avail.

Dawud Ibsaa, the leader of the separatist group admits in an interview with the VOA last week that he has armed soldiers in the south and west of the Oromo region although he did not say how many.

The Ethiopian government last week called on the Oromo Liberation Front (OLF) to immediately disarm its combatants that were still carrying weapons.

In a related development, police in Ethiopia’s western restive region of Benishangul-Gumuz said last week that they have cracked down on an illegal military training facility in the region.

The regional police commissioner told the Ethiopian Television that about 400 trainees, mostly teenagers, were undergoing military training at the illegal facility in Asossa district.

The OLF and a number of other armed opposition groups returned to Ethiopia from their base in Eritrea after they had reached a peace deal with the government. The deal involves that the opposition lay down arms and their soldiers check into camps, according to the government.

But Dawud Ibssa, the leader of OLF insists there was no such deal with the government.