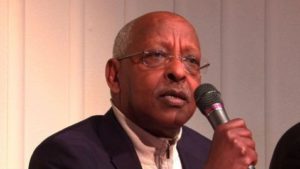 A leading Oromo political figure said he was baffled by the position of the Oromo Liberation Front (OLF) to remain armed.

In an interview with a local radio station, Lenco Latta, who is the chairman of the Oromo Democratic Front (ODF) said the recent statement by Dawud Ibssa, Chair of the OLF, which showed refusal to disarm his soldiers was perplexing.

Mr. Ibssa has doubled down on the issue yesterday saying he has armed soldiers in the south and west of the Oromo region. In an interview with the VOA, Ibssa refused to put figures as to the size of the soldiers.

“If we wish to build a democratic system, then we only need the government’s army,” Mr. Lenco Latta meanwhile said.

“Where were the OLF soldiers when the Oromo youth was fighting government tanks with empty hands?” Lenco Latta asks and added “whom are they [OLF] going to fight?”

“If there are OLF soldiers still armed, then they should not refuse to disarm,” Lenco told Ahadu Radio.
Dawud Ibssa says the OLF is of the position that the current Ethiopian army is an army of the ruling EPRDF. He said there are what he called “criminals and operatives of the intelligence security of the ruling party” with in the Ethiopian army; a concern he said the OLF had communicated with the government. Ibssa said he expect the government to identify the “criminals and operatives of the ruling party” with in the army and take appropriate measures.

The OLF and a number of other armed opposition groups have returned to Ethiopia from their base in Eritrea after they had reached a peace deal with the government. The deal involves that the opposition lay down arms and their soldiers check into camps, according to the government.

Gofe said in his statement it would be tantamount to crossing the “red line” if any opposition group decides to keep arms.

The Prime Minister, Abiy Ahmed, also weighed in on the issue saying opposition groups “do not need to be armed with weapons but ideas.”