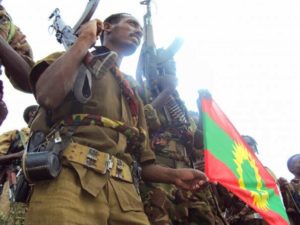 Ethiopian government spokesperson called on the Oromo Liberation Front (OLF) to immediately disarm its combatants that were still carrying weapons.

The OLF and a number of other armed opposition groups have returned to Ethiopia from their base in Eritrea after they had reached a peace deal with the government. The deal involves that the opposition lay down arms and their soldiers check into camps.

The ambiguous and controversial statement by Ibssa, who said disarming his soldiers was not part of the deal to return home, was taken by many as a refusal to disarm.

Gofe told reporters in Addis Ababa that the OLF had disarmed 1,300 of his soldiers before they crossed into Ethiopia, but said there were still soldiers that should be disarmed. It was not clear if the minister was implying that the OLF had armed combatants that were already inside the country.

The spokesperson said the question of disarming combatants is not up for negotiation. He warns that the government would take measures to disarm anyone to fulfill its duty to protect the peace of the citizenry.

Gofe said it would be tantamount to crossing the “red line” if any opposition group decides to keep arms.

The Prime Minister, Abiy Ahmed, also weighed in on the issue today saying opposition groups “do not need to be armed with weapons but ideas.”