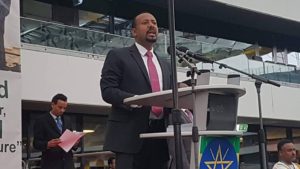 Ethiopian Prime Minister said his government is working to reform the electoral board, defense, judiciary and education sectors.

Abiy Ahmed was speaking today at the CommerzBank Arena in Frankfurt, Germany where thousands of Ethiopians from all over Europe gathered to ask the premier questions of relevance in the direction the country is moving.

He told the Ethiopians that his government is forming institutions of democracy and experts were being assigned to help the process of building those institutions.

The reformist Prime Minister, who assumed office six months ago, has promised to make sweeping reforms in the economic and political fields. He promised to hold a free and fair election and had invited the opposition to join him in changing the country for the better.

“Very soon, decisive steps will be taken in the areas of justice to reign the rule of law,” Ahmed said.

Thousands of Ethiopians flocked at the CommerzBank Arena in Frankfurt in a rare show of support to Ahmed’s government. He called on the Ethiopians to bring their knowledge, skill and experience to their country to do away with unemployment and poverty.

It was the second visit abroad by Ahmed in his quest to unite the Ethiopian Diaspora. His visit to the United States in July drew the gathering of tens of thousands of Ethiopians in DC, Los Angeles and Minneapolis, who came out to support political reforms back home.