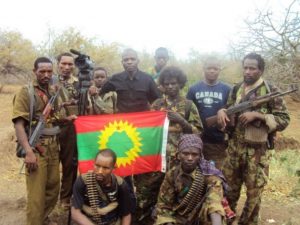 There has been growing concern that soldiers for the separatist Oromo Liberation Front (OLF), that have recently returned to the country from neighboring countries, were still remained armed.

Other armed groups that have returned to Ethiopia after peace overtures by Prime Minister Abiy Ahmed’s government have been disarmed and made to settle at camps set up by the government.

Soldiers for the OLF were, however, still roaming free and armed in various areas in the Oromo region.

A member of the leadership of the OLF, Tolera Adeba confirmed to The Reporter, published in Addis that his soldiers were armed and present in east, north, south and central areas in the Oromo region.

Rural and Political Affairs Head with the Oromo region, Addisu Arega has called on the OLF soldiers to disarm and head to camps set up by the government.

Arega said OLF should respect the agreement reached with the government and implement without any delay. He said the delay has resulted in deadly attacks and displacement of innocent citizens.

There have been several ethnic attacks in a number of areas in the country with victims blaming armed Oromo groups for perpetrating gruesome killings.