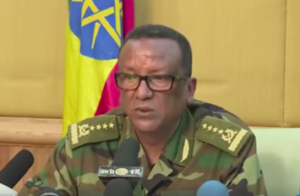 Chief of Staff of the Ethiopian defense forces said the special commandos that showed up at the National Palace last week and demand to speak to the Prime Minister have violated the country’s constitution and the military discipline that they were highly expected to strictly adhere to.

Last week a group of special commandos showed up unannounced at the National Palace and demand to speak with the Prime Minister. The soldiers reportedly wanted the PM to address salary and benefit issues.

Seare Mekonnen said at a press conference over the weekend that those who planned and encouraged the over 200 special commandos to march to the National Palace on Wednesday and demand to speak with Abiy Ahmed while they were fully armed have violated all the laws in the book.

The Chief of Staff said the leaders of the illegal action were arrested while a thorough investigation was underway to determine the motives behind what he described as anarchy by some members of the special commandos.

He said the 240 commandos that showed up at the National Palace were fully armed with snipers and other weapons.

The soldiers had refused to disarm and insisted on speaking with the PM while armed.

After negotiations with the guards at the Palace the soldiers had finally agreed to disarm and enter the premises of the Palace, according to the Chief of Staff, who said the Prime Minister had to interrupt his ministerial meeting to speak with the soldiers.

The commotion at the Palace last wednesday made quite a scene with some fearing a mutiny was underway.

After the meeting, the Prime Minister did some press-ups with the soldiers to make light of the otherwise tense moment.

The Chief of Staff declared the action by the commandos unconstitutional and said those who organized the unlawful march to the Palace would be
prosecuted to the fullest extent of the law.