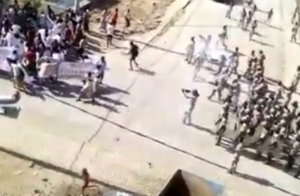 Towns in the Afar region of northern Ethiopia have continued protests against the local government demanding reforms and respect for human rights.

Demonstrations have continued in Dalol and Erebti calling for the federal government to intervene and stop abuses by local authorities.

The newly appointed Minister of Defense, Aisha Mohammed and Chief of staff Seare Mekonnen have reportedly arrived in the region and were in talks with local officials.

Afari rights groups have called for the federal government to respond to the demand by the people of Afar for reforms in the local government and an end to human rights abuses.

Two weeks ago, special forces of the region shot and wounded eight people in a demonstration that was called to denounce the regional government for failing to respond to public demand for development and respect for human rights.