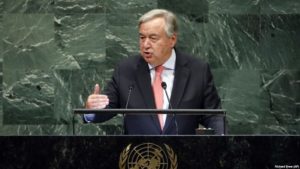 The United Nations Secretary General says he was hopeful that peace efforts in the Horn of Africa would continue to be consolidated so that the people in the region would turn the page on war and conflict.

Speaking at the UN General Assembly in New York, Antonio Guterres, who described today’s world order as “increasingly chaotic,” said “on the positive side, there is momentum for peace in the Horn of Africa as a result of detente between Ethiopia and Eritrea; in South Sudan; and in Colombia.”

“Just days ago, i witnessed the signing of historic peace agreement between Ethiopia and Eritrea. Soon after, the presidents of Djibouti and Eritrea met in Jeddah to launch a peace process,” said Antonio Guterres.

He also mentioned that in the same region, in the context of the summit of IGAD, rivals in South Sudan have finally signed a peace agreement.

On the sidelines of the Assembly, the Secretary General met Ethiopia’s Minister of Foreign Affairs. Dr. Workneh Gebeyehu, and said he “welcomed the rapprochement between Eritrea and Ethiopia as a positive development for regional peace and stability.”

The Secretary-General also reiterated the United Nations full support to Ethiopia’s facilitation of dialogue between Djibouti and Eritrea, according to the Ministry of Foreign Affairs of Ethiopia.