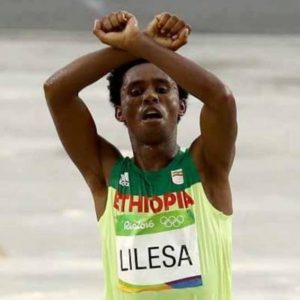 Feyisa Lilesa, an athlete who used an Olympic platform to expose the plight of his countrymen under a brutal regime, will return home on Sunday after two years in exile.

Lilesa crossed his forearms over his head in the finishing lines of the 2016 Rio Olympics, where he won silver, to be a voice for voiceless people back in his country at the height of an anti government protest and a brutal crackdown by the government against protesters.

The Ethiopian Olympic Committee and the Ethiopian Athletics Federation have extended their invitation to Feyisa Lilesa to return home. The athlete will be accorded a heroes welcome in Addis Ababa, according to organizers.

The athlete has been living in the United States and has still been taking part in international competitions.

The return of the athlete and a number of opposition figures and groups came after a reformist Prime Minister, Abiy Ahmed took power in April and made calls to all exiled opposition parties and critics of the government, some of whom labeled “terrorists” by the previous administration, to return home. 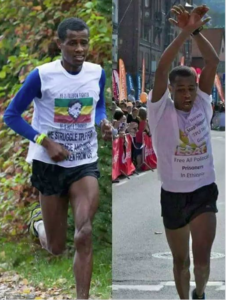 Meanwhile, Mulugeta Zewdie, who was the first to use athletics platforms in Europe to protest a brutal regime in his country, said he was denied travel documents by the Ethiopian embassy in Norway.

The athlete, who called on the government to provide him with the necessary documentations, said he wishes to return to the country he miss so much.