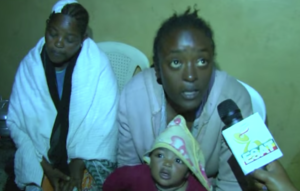 Victims of the weekend attack in Burayu, in the outskirt of the capital, recounted their agony to ESAT reporters in Addis Ababa saying they were beaten, their houses set ablaze and family members killed.

A man said his father, sister and friends were all killed in the weekend attack. He said his sister was killed in a machete attack. The man also said his house was set ablaze.

A woman said they hit her in the head and sustained serious injury after she told the attackers that her husband was not at home. She said they later found the hasband where he was hidden and brutally attacked him, leaving him in critical condition.

Another man says they tried to hide their children in the nearby forest to save them from the attackers. He said he saw perpetrators killing other people with machetes. His house was set on fire and his cattle was raided.

For more on the weekend violence in Burayu and Addis Ababa, read here:  https://ethsat.com/2018/09/ethiopia-at-least-25-killed-in-burayu-in-ethnic-attacks-police-killed-5-in-addis-ababa/