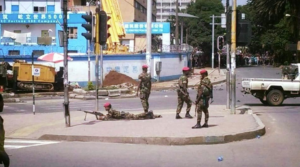 The capital’s police department warns against any demonstration in Addis Ababa saying “some individuals” have called for a rally for tomorrow without permit from the city government.

The statement from the Addis Ababa Police Commission says legal actions would be taken against those who would hold a demonstration tomorrow.

Tension has been escalating in the capital since Saturday after a group carried out deadly ethnic attack in Burayu, west of the capital and other areas where latest figures show as many as 65 people have been killed.

Many residents of the capital today attended the funeral of two people killed in the violence.

It was learnt that the demonstrations were planned to denounce the violence and to demand instigators of ethnic hate and violence to be brought to book.

The statement by the capital police called on organizers to refrain from holding any demonstration as conditions have not been met to hold a rally. The statement also said the police were preoccupied with other works and have been stretched out thin to keep the community safe.

The United States Embassy announced yesterday on its Facebook and Twitter that it would be closed today “in abundance of caution in light of large scale demonstrations expected in Addis Ababa.”