Ethiopia: Tension and confrontation over display of flags in Addis Ababa 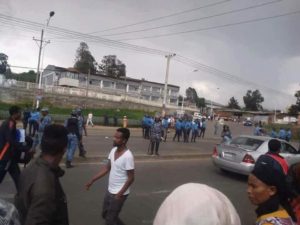 There are reports of confrontations among the youth in some quarters of the capital today over the display of flags ahead of the return of the leaders of the Oromo Liberation Front (OLF) from exile on Saturday.

Photos and video sent to ESAT show what appeared to be a flash demonstration of two groups vowing to defend their flag.

Several sources say the confrontation was sparked when some youth took down the Ethiopian flag and replace it with the flag of the OLF, which is also considered the flag for the Oromo protest movement.

Addisu Michael, Medhanealem, St. Paul Hospital and Pasture Hospital areas were some of the places clashes were reported but police quickly intervened to stop the fight, according to ESAT sources. Police used tear gas to disperse some of the youth. Photos of cars with smashed windows were also shared on social media. 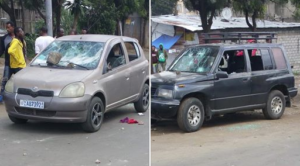 The capital Addis Ababa, that welcomed the return of Patriotic Ginbot 7 on Sunday was adorned with the Ethiopian triclor of green, yellow and red. Public spaces, sidewalks and road dividers were painted with the triclor. But supporters of the OLF think it was their turn to put their flag. Skirmish ensued when they tried to take down the Ethiopian flag to put their own, according to several sources.

The leader of OLF, Dawd Ibssa, and his soldiers based in neighboring Eritrea will return to Ethiopia on Saturday. Towns in the Oromo region have hoisted the OLF flag to welcome the group.

Taye Dendaa, public relations head with the General Prosecutor, who is an Oromo, called for calm and said people need to focus on issues of national significance than fight over display of flags.

Several Ethiopian armed opposition groups have returned home in response to a call by Prime Minister Abiy Ahmed, who vowed to hold a democratic election and called on the opposition at home and abroad to engage in a peaceful political process.