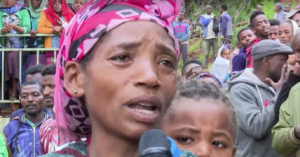 Over 200 suspects of ethnic attack perpetrated last weekend outside Ethiopia’s capital Addis Ababa have been arraigned today before the 19th bench of the federal high court.

The defendants were accused of planning and coordinating the attacks in Burayu and other districts in the outskirts of the capital where at least 58 people were killed.

The federal police also presented names of individuals who allegedly used vehicles in transporting the perpetrators and making payments to the alleged participants in the ethnic attack.

Police in Burayu have also arraigned 35 suspects of the attack before a court in the town.

The courts have allowed additional 14 days requested by police to finish its investigations into the deadly attack.

Nearly 400 suspects have been arrested in connection with the weekend attack.

Last weekend saw deadly ethnic violence in west of Addis Ababa, especially in Burayu, where residents and victims told several media outlets that a group used rocks, knives and sticks to attack the Dorzes and other ethnic groups from southern Ethiopia.

Thousands flee their homes to save their lives and are now sheltered in schools.