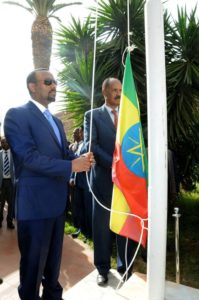 Ethiopia has reopened its Embassy in Eritrea, after twenty years hiatus sparked by a border war.

The thawing of diplomatic relations between the two countries began in July when Ethiopia’s Prime Minister made a historic visit to Eritrea after he announced that his country had accepted a boundary commission decision to resolve a border dispute.

Eritrea’s President Isaias Afwerki paid a visit to Ethiopia, a week after Ahmed’s trip to Asmara. Eritrea also reopened its Embassy in July.

The two leaders joined hands in raising the flag of Ethiopia at the ceremony of the reopening of the Ethiopian Embassy compound in Asmara today.

An Ethiopian commercial ship has also docked at the Eritrean port of Massawa yesterday for the first time in twenty years, marking the resumption of commercial relations between the two countries.

A declaration signed between the two countries in July stipulated that the two sides have agreed to reopen diplomatic, political, economic and cultural ties.