Ethiopia: Priority should be building institutions of democracy, not rush to elections, says Berhanu Nega 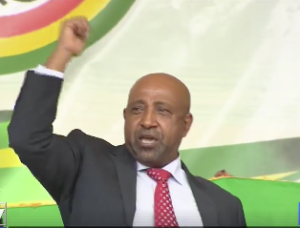 Berhanu Nega sings along his supporters in Addis Ababa on Sunday September 9, 2018

Returning home from exile after 11 years, the leader of Patriotic Ginbot 7 said the country should give priority to stability, maintaining reforms and building institutions necessary for the functioning of a democratic process.

Speaking to thousands of supporters and residents of the capital Addis Ababa who came out to welcome the return to Ethiopia of PG7, its chairman, Prof. Berhanu Nega said his party was not in a hurry to hold elections but help the process of establishing institutions that will ensure a free and fair electoral process as well as making sure an independent judiciary is in place to resolve any disputes.

Nega’s former party, the Coalition for Unity and Democracy, CUD, swept the 2005 elections and he was the first elected mayor of the capital Addis Ababa. The ruling EPRDF, led by the late Prime Minister Meles Zenawi, rigged the elections as international election observers declared foul play. Mr. Nega and hundreds of political leaders and supporters were thrown into jail.

Released after nearly two years, Nega and his comrades formed Patriotic Ginbot 7 Movement for Unity and Democracy in exile. But it was quickly outlawed by the EPRDF parliament that labeled it and other opposition groups “terrorists.” The regime has used a broad interpretations of an Anti Terrorism Proclamation to target opposition groups and dissenters. Hundreds of critics and opposition party members were labeled terrorists and thrown to jail accused of violating the Proclamation.

Soon after it was established, PG7 adopted armed struggle as one of the means to bring changes in the country. It was based in Eritrea until last week when hundreds of its soldiers laid down arms and came home in response to a call by reformist and young breed of leaders within the EPRDF, led by Abiy Ahmed, the Prime Minister, who made a call to all opposition groups at home and abroad to work together and engage in peaceful political struggle.

The “terrorist” label on the opposition has been scrapped by the same Parliament. Thousands of political prisoners have been freed since Abiy Ahmed took office in April.

A number of political groups in exile have returned home in the past couple of months and declared their intent to take part in peaceful political process. Over 200 members and supporters of Nega’s party from across the globe have arrived in Addis Ababa on Sunday and received a warm welcome in the capital.

Speaking on Sunday at the Addis Ababa Stadium, Prof. Nega thanked the reformist group within the ruling EPRDF for making the political changes possible and for the call made to the opposition to return home. But he made it clear that citizen politics, as opposed the ethnic politics espoused by the ruling party, was his party’s platform. He however said that his party’s immediate focus is to help efforts to bring peace and stability in the country.

Nega said the country is once again at the crossroads.

“We have to seize this opportunity to create a country that is at peace with itself,” Nega said and added “political differences should not be reasons to see the other party as an enemy.”

He called on all parties to work together for the establishment of institutions of democracy, free and independent civic associations and media.

Also speaking on the occasion was Andargachew Tsege, the party’s Secretary General who said their struggle was not over but has actually just begun. Mr. Tsege was released in May this year after he was jailed for four years. In June 2014, he was picked up at the Senaa Airport by Yemeni authorities and was handed over to operatives of the Ethiopia regime.

“Our struggle will come to an end only when we create a country where the youth live without fear, where they have a right to work and prosper,” he told a packed stadium as loud cheers interrupted his speech.

Ethiopia is slated to hold the next elections in 2020 and local elections are due in six months.

Administrative boundaries have been drawn along ethnic lines in a country where ethnic politics and emphasis on one’s ethnic origin have dominated the political modus operandi for 27 years.

With the opportunity comes fear of the known and challenges derived from entrenched ethnic feelings.