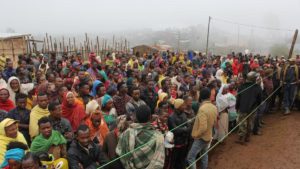 1.4 million new internal displacements have already been recorded in Ethiopia, surpassing both Syria and the Democratic Republic of the Congo, says the Internal Displacement Monitoring Centre (IDMC).

“IDMC’s mid-year report shines light on Ethiopia, where new conflict broke out in Gedeo and West Guji zones in the south of the country earlier this year, triggering more than a million new displacements,” the report said.

The report also said internal border disputes between Somali and Oromia regions in the east of the country that flared up toward the end of 2017 also continued.

“In the Horn of Africa, Ethiopia, Kenya and Somalia experienced nearly a million new displacements due to unprecedented flooding in April and May after an extended period of drought in the region exacerbated by the Indian El Niño weather phenomenon.”

“Our mid-year assessment serves as an important temperature gauge of the state of the world today. Conflict and violence in low-income countries are becoming more protracted and causing ever-high numbers of people to flee their homes, while vulnerable communities in disaster-prone regions or in areas experiencing the effects of climate change are increasingly at risk and disproportionately impacted by internal displacement,” said IDMC’s director, Alexandra Bilak.

Worldwide, there were 5.2 million new internal displacements associated with conflict and violence in the first half of 2018, based on the analysis of data from the 10 worst-affected countries, according to the report.