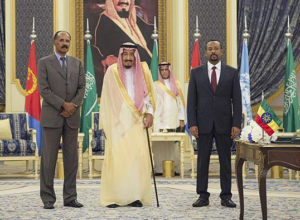 Ethiopia and Eritrea signed an agreement in Jeddah, Saudi Arabia to reaffirm their declaration made in July for peace and friendship.

“The state of war between the two countries has ended and a new era of peace, friendship and comprehensive cooperation has started,” the agreement that was made public today and signed by Ethiopia’s Prime Minister Abiy Ahmed and Eritrea’s President Isaias Afwerki stipulated.

The two countries have also agreed to implement the Eritrea-Ethiopia Boundary Commission decision that came after a two year border war which claimed the lives of some 70,000 people from both sides.

“The two countries will promote comprehensive cooperation in the political, security, defense, economic, trade, investment, cultural and social fields on the basis of complementarity and synergy,” the agreement stated.

Ethiopia and Eritrea have ended animosities and entered into a new era of peace after a reformist Prime Minister took the helm of power in Addis Ababa and made peace overtures to Eritrea, which was reciprocated by its President Isaias Afwerki.