Ethiopia: Authorities call for calm in Addis Ababa as tension rises ahead of return of Oromo party 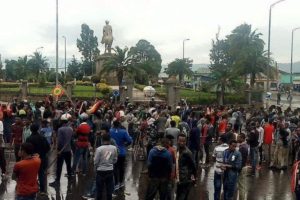 Authorities and representatives of political parties called for calm and restraint in Ethiopia’s capital Addis Ababa as clashes reported in several subdivisions in the city.

The youth from towns surrounding Addis Ababa, who are mainly ethnic Oromos, have marched to the capital today and hold flash street demonstrations in support of the Oromo Liberation Front (OLF) and its leaders, who are returning home from exile tomorrow.

Some of the demonstrators have reportedly clashed with residents of the capital. Police used tear gas to disperse violent groups in some parts of the city.

Fight broke out when some of the Oromo demonstrators tried to remove Ethiopian flags and banners to replace it with theirs. Some have also gathered around the Menelik II statue in an apparent attempt to vandalize the iconic landmark. Angry residents of the city came out to stop the vandalism and police intervened to stop what would have been a bad ending, according to several sources who spoke to ESAT from the Addis Ababa.

The Oromo demonstrators have travelled to Addis Ababa waving their flag and chanting slogans to welcome leaders of the Oromo Liberation Front (OLF), who are returning home tomorrow from their base in neighboring Eritrea.

Last week, thousands of people gathered at the central Meskel Square and the Addis Ababa Stadium to welcome leaders and members of Patriotic Ginbot 7, an armed group that was based in Eritrea.

The Federal Police, the city’s Deputy Mayor, Takele Kuma and representatives of political parties have urged people to be peaceful in tomorrow’s welcoming event for OLF.

Several people have been injured today as per photos and messages shared on social media. One person is reportedly killed but ESAT could not independently verify the report.

Observers of the developments in Addis Ababa blamed some Oromo ethno nationalists abroad and at home as well as some elements of the TPLF for stirring up to escalate the situation.

Meanwhile, a planned concert by Ethiopia’s king of pop, Teddy Afro, that was due to be staged tomorrow has been put off for a week. The decision came after the singer and city authorities agreed the timing of the event was not fitting due to the tense situation in the capital.