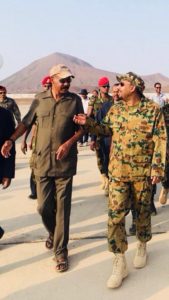 Leaders of Ethiopia and Eritrea spent New Year’s day in the border towns of Bure and Zalambessa, two places that have seen the brunt of a two year trench warfare in 1998-2000.

Ethiopia’s young and reformist Prime Minister, Abiy Ahmed and Eritrean President Isaias Afwerki have officially reopened roads linking the two countries and spent the Ethiopian/Eritrean New Year that is being celebrated today with soldiers from both sides in the towns of Bure and Zalambessa.

“Road links between Ethiopia and Eritrea will be operational, opening the gate for cross border movement of people and goods. With full normalization, our recent tragic history is coming to an end,” tweeted Fitsum Arega, Chief of Staff for Ethiopia’s Prime Minister.

The two leaders have officially opened the Debay Sima-Bure border point, which is close to the Port of Assab and Serha-Zalambesa border, according to Arega.

The two leaders have “fully marked the radical transformation of the Ethio-Eritrea border into a frontier of peace and friendship,” Arga said in another tweet.

The fast tracked rapprochement came after Dr. Ahmed made peace overtures as he took the premiership in April this year. Since then, the two leaders made historic visits to each other’s capitals and the countries reopened telephone connections, resumed flights between Addis and Asmara. An Ethiopian ship was also docked last week at the port of Massawa for the first time in twenty years.

The scene in Zalambessa and Bure was an emotional one, with families reunited for the first time in over twenty years. Hugs and kisses everywhere as soldiers from the two sides posed for photos, bringing their arms together.