A delegation of the Ethiopian government and a faction of the Oromo Liberation Front (OLF) led by Dawud Ibsa have agreed to end hostilities at a reconciliation agreement signed in Eritrea’s capital Asmara. 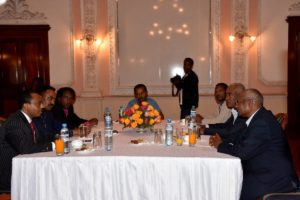 Eritrea’s Minister of Information, Yemane G. Meskel announced in a series of tweets today that the agreement signed by the two sides “provides for the termination of hostilities and for the OLF to conduct its political activities in Ethiopia through peaceful means.”

The two sides also agreed “to establish a joint committee to implement the agreement.”

A delegation led by Ethiopian Foreign Minister Workneh Gebeyehu flew to Asmara yesterday to meet Dawud Ibsa, whose Front is based in Eritrea.

Most exiled Oromo political groups have returned to Ethiopia to be part of the ongoing political changes in the country. The OLF faction led by Ibsa would be carrying out its political activities inside Ethiopia if the agreement goes into effect.

In July, Megersa accused that some groups were trying to destabilize his region under the guise of fighting for the rights of the Oromo people.

Megersa said last month that a group which he said was claiming to fight for the liberation of the Oromos has attacked security forces and ransacked public and private properties in the Western part of the region. The group has reportedly killed four police officers and destroyed properties.

Meanwhile, while in Asmara, the Ethiopian delegation reportedly met with Eritrean President Isaias Afwerki and exchanged views on implementation of the recently signed peace agreement between the two countries.