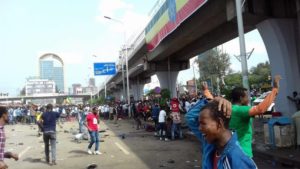 The federal court of first instance in Addis Ababa gave additional 8 days to police that is investigating suspects in foreign countries linked to the June 23 assassination attempt on the life of Prime Minister Abiy Ahmed.

Police have requested the court for additional 14 days to further investigations on the prime suspect, Tesfaye Urgie, who ironically was the head of the anti-terrorism task force with the Ethiopian National Intelligence and Security Service (NISS), the country’s spy agency.

Police told the court, which allow them 8 days of the requested 14 days, that they had new leads showing Urgie might have a hand in other deadly attacks and clashes in the country besides having a leading role in the June 23 assassination attempt on Dr. Ahmed at a support rally at Meskel Square in central Addis Ababa. Police also said more time was needed to investigate suspects who live in foreign countries that they believe had worked in tandem with Urgie.

Money sent from abroad, flags and grenades found on the site of the assassination attempt need additional investigations, according to police, that also revealed to the court that the suspect had accumulated wealth that was way beyond his means.

Urgie’s defense attorney meanwhile said his client was being tried in the court of public opinion and demand the court to stop biased media coverage about Urgie. The defense also objected the additional 8 days given to police investigating the case.

Over thirty suspects were arrested in connection with the attack. Among the them were police chiefs, including Girma Kassa, who was the deputy commissioner of the capital’s police, arrested for showing security lapse at the rally.

The police chiefs were released on bail yesterday.

Two people were killed and over 150 injured when a grenade went off as a man tackled a suspect who was trying to hurle the bomb in the direction of a podium where the Prime Minister was sitting.