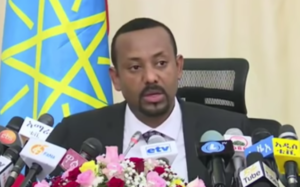 Ethiopia’s reformist Prime Minister, Abiy Ahmed, who said he would only stay in power if he wins an election, reiterated his position that he doesn’t see any reason for postponing the 2020 elections.

Abiy Ahmed, who met the press on Saturday for the first time since he took office, also noted that his goal was to ensure the conduct of a free and fair election in the country.

He said electoral registration would be electronic and the plan was to move away from the traditional paper ballots to ensure the integrity of the elections.

Dr. Ahmed sat for almost two and half hours answering a range of questions including the fate of former Ethiopian president, Mengistu Hailemariam, who is in exile in Zimbabwe. Asked if Mengistu Hailemariam would be given amnesty and come back home, Dr. Ahmed responded that the Ethiopian constitution does not allow pardoning individuals convicted with crimes related to the infamous “Red Terror,” a violent campaign by Hailemariam that killed opponents who carried out “White Terror” on members of his party in the 1970s.

World bank’s move has also been seen as a nod to the Prime Minister who is credited for opening up the political space, released thousands of political prisoners and vowed to partially privatize key sectors of the economy like telecom, airlines, shipping and logistics.