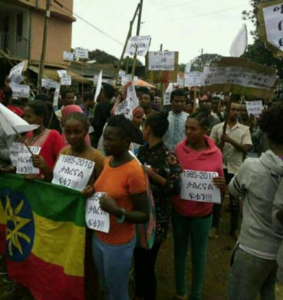 A resident who spoke to ESAT on the phone from the town said three people were killed last week and another two were killed yesterday in what he said was an attack by the Shekacho against other groups.

The resident said the people in the town demand justice and an end to the domination of political power by the Shekachos, who are indigenous and consider others as settlers. He said the police, courts and government offices were all controlled by the Shekachos and other groups could not get fair justice. He also claimed other groups were deprived of job and other opportunities.

Three residents of the town were killed two weeks ago after an attack by the indigenous people against other ethnic groups. Two people were also injured in the attack.

The resident who spoke to ESAT accused that the special forces of the region have colluded with the Shekachos in attacking other groups.