Eritrean delegation in Addis for talks on implementation of peace agreement

An Eritrean delegation led by Foreign Minister Osman Saleh and presidential adviser Yemane Gebreab is in Ethiopia’s capital Addis Ababa for further talks on implementation of a peace deal signed between the two countries after 20 years of state of war. 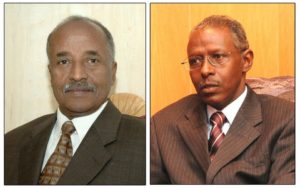 Last month, Ethiopian Prime Minister Abiy Ahmed and Eritrean President Isaias Afwerki signed a declaration in Asmara to implement the decision of a boundary commission that was set up by the permanent court of arbitration at the Hague.

The two sides agreed to go ahead with the decision of the commission that would delimit the border between the two sides. The two countries went to war in 1998 over a disputed territory that claimed the lives of at least 70,000. Although the the territory of Badme was the flashpoint of the war, analysts agree that economic measures taken by both sides have contributed the conflict.

The declaration signed last month by the two leaders in Eritrea’s capital Asmara also provides for the resumption of economic, diplomatic, social and cultural cooperations.

The Eritrean delegation is expected to meet and discuss with Ethiopian high ranking officials including Prime Minister Abiy Ahmed.

Peace overtures by a new Prime Minister in Ethiopia in April to open negotiations and establish relations with its neighbor was reciprocated by the Eritrean President, leading to historic visits by both leaders to the other country.