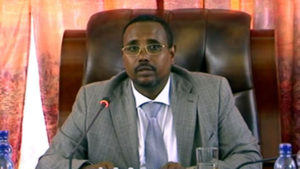 Abdi Mohamoud Omar, a.k.a. Abdi Illey, who was deposed from the presidency of the Somali region yesterday, has been arrested and taken to undisclosed location.

The BBC Amharic report said members of the national army have arrested Illey and removed him from his palace in Jijiga.

Unrest in Jijiga and Dire Dawa resulted in the death of at least 40 people in the weekend. The Liyou Police and an armed youth group known as Heego, both allied to Abdi Illey were accused of perpetrating the killings.

Illey has been under pressure to resign following relentless protest demonstrations in the region. He was accused of abuse of power, torture and imprisonment of his critics, corruption as well as the displacement of over a million Oromos and the killing of hundreds in communal clashes under his watch.

Abdi Illey has kept close ties with TPLF army generals who are allegedly engaged in contraband trade that is rampant in the region.

Illey’s downfall is seen as the end of control by the TPLF and its generals over the region.

Read here for more on the weekend unrest in Somali region: https://ethsat.com/2018/08/scores-killed-in-jijiga-dire-dawa-in-an-attack-by-liyou-police-and-armed-youth/