“The bird of peace has just flown to Asmara:” Ethiopian Airlines makes return flights to Eritrea in twenty years 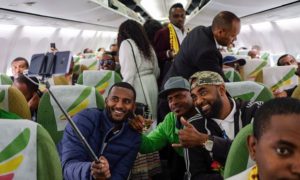 The sound of clinking champagne glasses and the smell of roses has dominated the cabin of the first flight to Eritrea’s capital Asmara by Ethiopian Airlines in twenty years; reuniting families and carrying passengers who are total strangers to a neighboring country, that until few weeks ago was considered an enemy territory.

The return flight to Addis Ababa carried about 90 Eritreans and it was an emotional reunion of families. Tears of joy flowing as families hug after two decades of separation.

The détente was a result of only few months, if not weeks, of efforts by the leaders of the two countries who vowed to end the state of war that was looming on the horizon for two decades and signed a declaration to re-establish diplomatic and economic ties.

The two countries went to a senseless war in 1998 over a disputed border area resulting in the loss of at least 70,000 lives.

The exchange of words and the body language of Eritrea’s President Isaias Afwerki and Ethiopian Prime Minister Abiy Ahmed, as they met in each other’s capitals last week, gave hope to the people on both sides that the era of enmity and bitterness was over and a new chapter of peace and cooperation has been opened.

“The bird of peace has just flown to Asmara,” said the Airlines in a tweet.

Passengers of the first flight to Asmara, including the former Prime Minister of Ethiopia, Hailemariam Desalegn, were welcomed at Asmara International Airport by Eritrean Foreign Minister Osman Saleh.

“This day marks a unique event in the history of Ethiopia and Eritrea,” said the CEO of Ethiopian Airlines, Tewolde GebreMariam.