Movement honored for mending fences between Ethiopia and Eritrea

ESAT News (July 24, 2018) Patriotic Ginbot 7-Movement for Unity and Democracy, has been honored at the 2018 Eritrean Festival for its unique contributions to building bridges and mending fences between Ethiopians and Eritreans at a dark time in their common history. 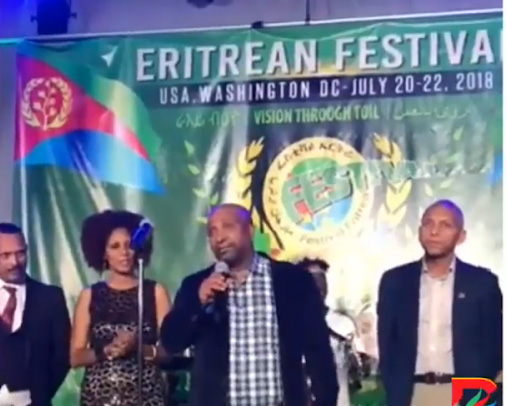 Receiving the award and recognition at the weekend in Washington DC, Prof. Berhanu Nega, Chairman of Patriotic Ginbot 7, said that the restoration of peace between Eritrea and Ethiopia is not only crucial to the two countries but also to the entire Horn of Africa sub-region. He noted that the main beneficiaries of peace in the two countries are the poor that aspire to develop and conquer poverty.

“A lot remains to be done as this is just the beginning of another chapter in our shared history that calls for wisdom and fortitude. Even if the challenges ahead are seemingly insurmountable, we shall overcome them cautiously and wisely,” he said.

Speaking at a panel held on the sideline of the festival, Neamin Zeleke, Executive Committee and Head of External affairs of Patriotic Ginbot 7 told the gathering that the two decade-long “walls that separated the two people are blown away by a sudden wave of fraternal love and hope for a promising future.”

Zeleke expressed “profound appreciation and eternal gratefulness for the government and the people of Eritrea. You were a friend, the only friend of Ethiopia and Ethiopians during our darkest hours.” He said Eritrea was the only country when almost all other countries turned their backs on the Ethiopian people as they struggled against the TPLF-led tyranny that has crumbled in the face of the struggle for justice and freedom.

He also commended the leadership of Prime Minister Abiy Ahmed and President Isayas Afeworki for ending the tragic war that caused incalculable destruction on both sides.