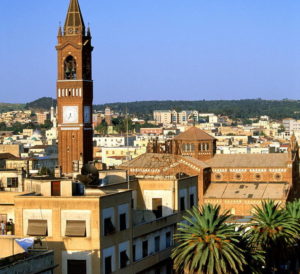 Ethiopian Airlines will make its first flight to Asmara, Eritrea, on Wednesday July 18, twenty years after the African giant carrier ceased to fly to its northern neighbor.

Fitsum Arega, Chief of Staff for Ethiopian Prime Minister Abiy Ahmed made the announcement in a tweet saying holders of Ethiopian and Eritrean passports would be granted visas on arrival in Addis Ababa and Asmara airports.

“Ethiopian Airlines will start its inaugural flight on July 18 to Asmara. All holders of #Ethiopia-n & #Eritrea-n passports could travel to each other countries & will be granted visa by the respective authorities upon arrival. Other nationalities need to secure visa in advance,” the Chief of Staff tweeted.

The two decade old stalemate between the two countries came to an end when leaders of the two countries signed a joint declaration on Monday to end a state of war and resume diplomatic and economic cooperation.

Ethiopia also says the reopening of roads to Eritrean ports were a priority and the benefits were far reaching.

“Reopening Massawa-Asmara-Addis Ababa road as well as Assab-Addis Ababa road, including the promotion of development programs along the Ethiopia-Eritrea border is among our priority tasks. The unfolding developments will not only benefit our peoples, but the entire Horn of Africa region will be a part of these developments,” Minister of Communication Affairs of Ethiopia, Mr. Ahmed Shide Mohammed said in an interview with Eritrean Ministry of Information website.

Direct telephone connection between the two countries was restored last Sunday, the day Ethiopia’s Prime Minister made a landmark visit to the Red Sea State and twenty years after a border war claimed the lives of at least 70,000 people.

People on both sides were calling relatives after twenty years. Some people in Ethiopia have called random numbers and spoken to total strangers in Eritrea.