Ethiopian and Sudanese troops have engaged in a brief battle after soldiers for the latter killed and injured several Ethiopian farmers. 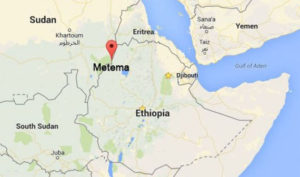 As information trickles slowly from the area, ESAT has learnt that the latest wave of attack by the Sudanese began three weeks ago when its army killed several Ethiopian farmers on a disputed farmland on the border between the two countries.

A witness who spoke to ESAT on the phone from Metema said the Sudanese side killed five farm workers four days ago in an unprovoked attack. The witness said Ethiopian forces have been deployed following that incident and had engaged the Sudanese in a brief battle. He said there were deaths on both sides. Seven Ethiopians including members of the army have been sent to Genda Wuha Hospital in Metemma after today’s brief exchange of fire, according to the witness.

An attack last night in Dalol agricultural development has left several injured, according to the witness who said Ethiopian soldiers were among them.

Several Ethiopian farmers were feared killed by the Sudanese in Quara.

The Ethiopian Border Affairs Committee in North America and other witnesses on the ground accused that soldiers for the Tigray People’s Liberation Front had a hand in the conflict. The TPLF has been accused of instigating previous attacks on Ethiopian farmers along the border.

The TPLF, that had the political and military upper hand in Addis Ababa until recently, had given large swaths of agricultural land to their comrades in arms in Sudan against the will of the Ethiopian farmers in the border areas. There have been several attacks by the Sudanese in past years, but the Ethiopian farmers have repulsed most.