Local authorities in North Shewa have seized several guns while being transported from the capital Addis Ababa to Northern Ethiopia. 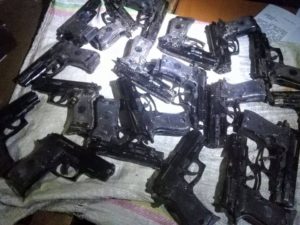 Police intercepted 53 guns in North Shewa hidden in Isuzu truck after a tip-off from the community led to a search.

The seized guns are Russian made Makarov pistols.

Reports by local media also show police have seized 20 guns and one automatic rifle in Debre Tsege (Sherero) town in North Shewa after a tip-off from the community. The weapons were being transported from Debre Markos to Addis Ababa in a personal vehicle when police made the arrest.

Authorities have called for collaboration from the public to stop the trade and movement of illegal weapons that has become rampant in Ethiopia.