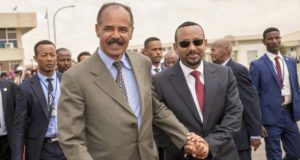 It will be the first visit by Afwerki to Ethiopia in 25 years; and 20 years after a border war between the two countries led to diplomatic and economic stalemate.

Afwerki is expected to address a gathering in Addis Ababa at the Millenium Hall and will hold talks with Abiy Ahmed as a follow up to the summit that began in Asmara last week.

At the end of Abiy’s visit to Asmara, the two sides signed a declaration on Monday announcing the end of a state of war between the two countries and to reestablish economic, diplomatic and cultural relations.