Leaders of Ethiopia and Eritrea would meet soon to further talks between the two sides to resolve borders issues and begin normalization. The announcement by the Ethiopian Minister of Foreign Affairs came at the end of a first leg visits by an Eritrean delegation to Ethiopia. 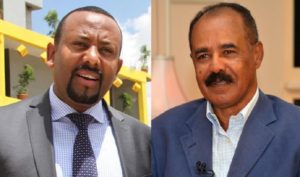 The Foreign Minister said the two sides would meet at the level of leaders “soon.”

Peace overtures by a newly appointed Ethiopian Prime Minister Abiy Ahmed few weeks ago was responded in the positive by Eritrean President Isaias Afwerki, who decided to send a delegation to Addis Ababa. The Eritrean delegation made a three day stay in Addis, but details of the talks were not made public.

The Eritrean delegation, which was expected to conclude its visit and return home today also carries a message from Ethiopia’s Prime Minister to Eritrean President, it was learnt.

Ethiopia and Eritrea have broken a wall of acrimony of 20 years when Addis Ababa announced two weeks ago that it would fully implement the Algiers agreement and the decision of a Boundary Commission, two binding commitments that came after a two year bloody war that began in May 1998 and ended in June 2000, claiming the lives of at least 70,000 people.