A grisly assassination of an Ethiopian activist in South Africa has been called suspicious with Ethiopians in Johannesburg putting the blame squarely on operatives of the Ethiopian regime and Embassy staff. 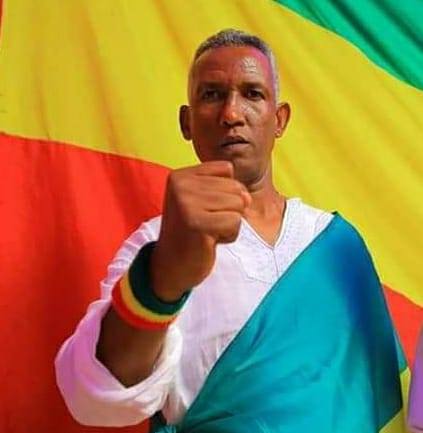 Gezahegn Gebremeskel, known in the community as Gezahegn Nebro, was shot and killed in a cold blooded murder on Saturday, sending shock waves to Ethiopians across the globe.

The news and photos of his dead body quickly spread on social media with condolences pouring in from Ethiopians from all corners of the world.

Nebro was at the Ethiopian Embassy in Pretoria on Friday, a day before his assassination, protesting a meeting held by Tigrayans and supporters of the minority ethnic regime in Addis Ababa. Friends of Nebro told ESAT that staff at the Embassy had threatened to kill Nebro if he does not stop his activism.

The Ethiopian Embassy has been mum on the issue. It has not expressed concern over the killing of its citizen, nor has it denied the allegations.

Nebro escaped an assassination attempt in 2012.

The former airborne with the Ethiopian army was well known in the community and has been instrumental in bringing together the Ethiopian community to stand up against tyranny back in his country.

It was learnt that the assailant shot Nebro at close range and fled the scene.

Community leaders told ESAT that they are hiring independent investigators to find Nebro’s killers and their accomplices.

Hired guns are not unusual in Johannesburg, a city with one of the highest rates of gun violence and murder.