Dissidents, journalists and bloggers detained at a police station on Sunday for displaying the Ethiopian flag at a private get together were transferred to jail with the police saying their case is being handled by the Command Post that is overseeing the state of emergency. 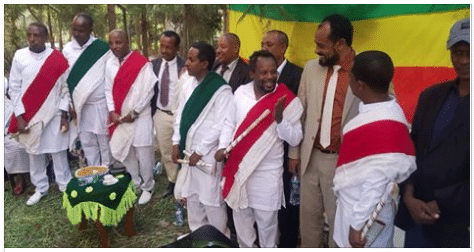 The gathering of political leaders, journalists and bloggers just before their arrest on Sunday March 25, 2017

The wife of Eskinder Nega, Serkalem Fasil, said Eskinder has told visitors that they were detained on orders of the Command Post alleging that they held “unauthorized” meeting and displayed an “illegal” flag.

Nega was quoted as saying that the condition they were held at the jail was very inhumane. Up to ninety prisoners were crammed in a small room in unsanitary conditions that is a threat to their health, according to Nega.

Police alleges that the detainees had displayed an Ethiopian flag, the original tricolor of green, yellow and red, without the controversial pentagram emblem, which many believe to be a copycat of the symbol of the “Church of Satanism.”
Meanwhile, activists in the Diaspora and back home have called for a one day social media campaign to highlight the plight of the prisoners and call for their unconditional release. The organizers of the campaign said the detainees are heroes, not criminals and that displaying the historic Ethiopian flag should not in anyway be considered an act of crime.

Ethiopia is in a state of emergency declared for the second time in two years. Protests against a minority ethnic oligarchy has been going on for the last three years as security forces of the regime responded with brute force.

Hundreds were killed and tens of thousands detained. A considerable of prisoners report torture by their captors.

The escalation of the crisis in Ethiopia led to the displacement of 1.2 million people a few months ago, mostly the Oromos in the country’s Eastern region.