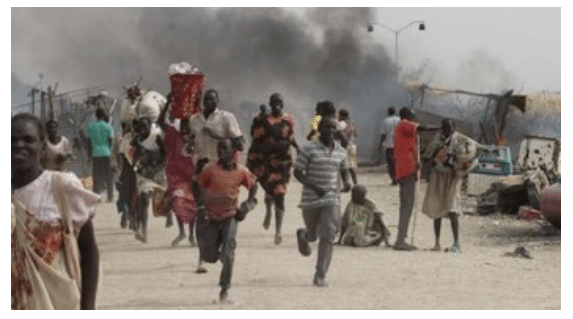 Children were among the dead in the attack by unidentified gunmen that came on Christmas eve.

The Radio quoted Andrew Kaka, chairman of Zone B at Dima camp, as saying that on Wednesday that at least eight people including women and children from the Murle tribe were killed and another person sustained injuries when three unidentified armed youth entered the camp around 7 pm and started shooting at the refugees on 24 December.

Those who lost their lives include three women, four children and an elderly man aged 60, kaka said

Kaka accused a group of local militia protecting gold mines in the region of attacking the refugees. But said “We are still waiting to know exactly who killed the innocent refugees.”

meanwhile , the South Sudanese Embassy in Addis Ababa said six members of the SPLA army have been arrested for stealing and selling firearms in the Gambella region of neighbouring Ethiopia.

“We have written a letter to the ministry of defense of Ethiopia last week to take those soldiers to federal court so that they face the law. We cannot interfere with another country’s laws.” the official said.